4 PLAYER CHESS IS QUITE FUN..

... but you should be aware that it is not like the traditional chess.


However, you can still develop your pieces as usual-the knights to their usual c3 and f3 squares, the bishops need open lines and so on so forth. That was what I did playing this game for the first time, and luckily it still paid dividends. There were four colours - blue, red, green and yellow, and you couldn't choose what colour you would have in this chess.com board. 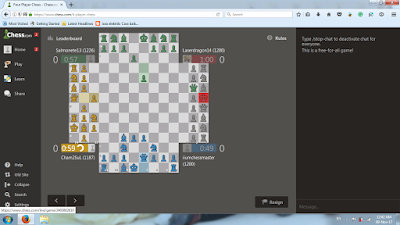 When I was playing, I didn't really know the rules. But I learned as the game went along. One of the players just pushed his pawn up the board and it changed into a queen in the middle of the board! WOW! I was shocked but I managed to neutralized the threat because he wasn't my nearest neighbour. It means he was not sitting on my left, so, there will be a move from another player directly on my left before I replied his.

Another thing is, you could eat a person's King and get lots of points by doing that! But, that person must be stoned first before his King is permitted to be eaten by anybody or else it would be illegal to do so. By stoning (this is my own word because I don't know the real word for it), I mean he should be out of the game by NOT MOVING WITHIN 1 minute ALLOCATED TIME. Knowing this, I took my left opponent's King after he was stoned.

In that game, Laserdragon14 was the first one to be stoned WITHOUT MOVING A SINGLE MOVE. I don't know whether he had connection problem or he was also new to this game and didn't know how to play it. His King was then eaten by Salmonete13. Cham2Sul was the second player to get stoned which left me to fight it out with Salmonete13.

Finally, when I got the hang of the game and controlled the centre, I managed to attack him vigorously. In the end, he could not find the solution and succumbed to the time trouble. This was the final position... 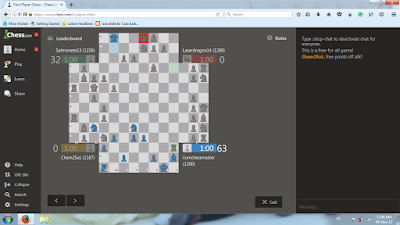 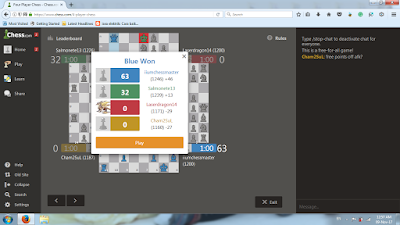