Muhammad Alif survived the final day misfortune which happened to his unlucky friends from the Tumpat team and clinched the final place in the under 18 male category. It has been a long time desire for the plucky lad as last year was the closest he has been to be a Kelantan representative. It was all down to hard work in training and, of course, a little luck. 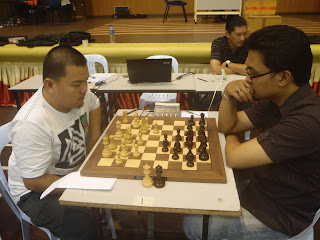 IM Mas Hafizulhilmi is still dodging from playing against me in a tournament. No, no. Actually, I should say that I am still not 'up there' to play against such a complete player like him. Last year in Kelantan Closed, I wasn't paired against him although I managed to finish fourth. This year in Kelantan Open, unfortunately, I still did not cross path with him on my way to finish seventh. He was such a celebrity that day; signing autographs for his fans who were mainly under aged players. Winning all 9 games showed exactly why he was rated 2354 FIDE, almost 300 points away from me who was second highest rated player with my 2068 FIDE. Calmly, he sprinted away and left the second place winner with a mere 7.5 points.

HECTIC! That is the most suitable word describing the Tumpat selection held in SMK Chabang Empat today. Increased participation from additional schools attending the selection ensured the hectic atmosphere around the block C hall. Inevitably, problems arose, and fortunately, solutions were found. Thanks to all involved, especially my beloved assistants, Saifuddin and Shamiera.