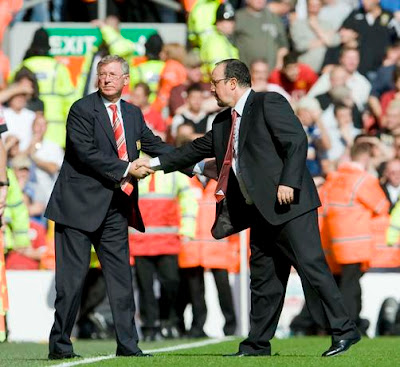 At last! Fergie's Sicilian Scheveningen is not invincible after all. Without Liverpool's double Knights Gerrard and Torres, they still beat their fiercest rivals, albeit in their own Anfield fortress. What makes it sweeter is that they won it by coming from a goal down, trailing after just 2 minutes of the game played, courtesy of Tevez's goal. However, both the wing pawns Riera and Kuyt created enough chaos inside Man Utd's castle. The former harassed Wes Brown until he scored an own goal, while the latter fed Babel to score the winner. 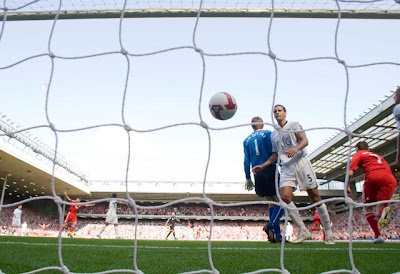 Babel and co. reeled away in delight as Rio Ferdinand looked in dejection
0 comments 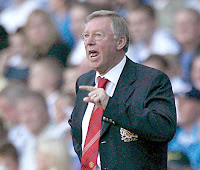 The most awaited fixture of the season is finally here. I can't wait to see LFC beat Man Utd at home turf. It is interesting to see how Rafa the chessmaster overcome Alex this time as he failed to do it for three seasons running (in the league, at least, as we won the FA Cup contest). No Gerrard, no Torres, Keane have to be at his very best to get through Fergie's chessmen. If I were the LFC manager, I would play the wing attack against Man Utd's tough Sicilian Scheveningen (just to stay within chess terms and territorries), pushing my g and h pawns up to shatter their defense. So, my g pawn (Albert Riera) and h pawn (Dirk Kuyt) should supply the much needed ammonition to the centre pawns (Robbie Keane and Ryan Babel) to produce the checkmate! It means I have to postpone my Terawikh prayer tomorrow night. This position arose from the Pirc Defense, and both sides were attacking their opponents King vigorously. Black has just played 26...Nd5, attacking my Queen. Do I run away, or do I plot another move?
27.Rxh7+
My first coach was an ex-National player who drills everybody into sacrificing, sacrificing and sacrificing your pieces in order to gain an advantage, or to burn your opponent's castle. Moves like this were filling my head during that time due to many exercises he gave us during the training sessions. Actually, if you really look into the position deeply, you can see that there is a possibility of a King hunt. You only have to pry open the castle's door by sacrificing a piece.

27...Kxh7 28.Qf7+ Kh6 29.Rh1+ Kg5 30.f4+ Nxf4
Even 30...Kg4 cannot help in view of 31.Qxg6+ Kxf4 32.Rh5 and mate is not that far away. I cannot help but smiled when he moved the Knight and captured the sacrificed (yes, another sacrifice, and its called 'clearance sacrifice' - according to some books) little pawn. It only made my task easier. By now there were many spectators gathering around our table; our teammates included. 31.Nf3+ Kg4 32.Rh4+ Kg3 33.Qxf4+ Kf2 34.Nd4+ 1-0
Boy, what a great feeling to come out victorious after the see-saw battle! Black surely had nightmares afterward, I know I will after being defeated by a junior like me (I was still in matriculation when summoned to play for the University team).