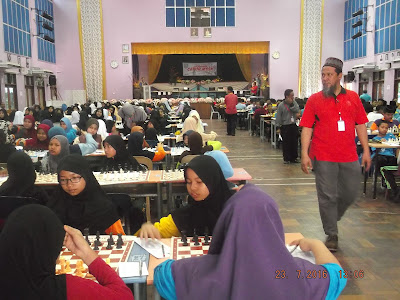 The dust has finally settled at SMK Pahi, Kuala Krai and 36 players from 368 hopeful competitors have been selected to be the representatives for the Kelantan state team in MSSM which will be held next month at Universiti Malaysia Kelantan main hall, Pengkalan Chepa. I was selected as one of the pairing arbiters and am relishing the opportunity to perform the same task in the national chess event.

The state selection, which was held from 23 to 26 July, produced some interesting games. I saw a Chinese boy checkmated his opponent in the Rook + Bishop vs Rook situation, which was really a hard task to do. Nevertheless, I want to share a game where one of my students from Tumpat district failed to capitalized on his material advantage and drew the game instead.


From this position, as you can see in the picture above, Danial moved his King to c5. The game continued 2.Ke4 Kb5 3.Ke5 Bg4 4.Kf6 Bh5 5.f5 and Danial had a hard time defending his position afterwards.

However, he should have moved his King to d5 covering key squares and pushing the opponent's King further down the board. 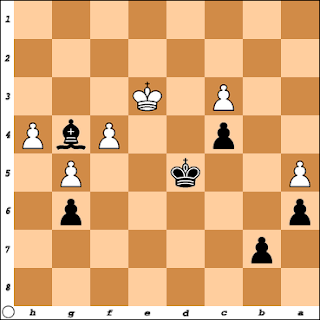 This move covers f3 so Heikal would have to make way for Danial's King to enter the key square e4 and take the Kingside pawns. As to rub salt into the wound, Heikal went on to represent Kelantan via the play offs while Danial was left painfully outside the top 10 by getting the 11th placing.

In the under 12 Boys play off, another of my student, Zal Hasani Aqil had a winning position but failed to find the correct move and lost.

From this position, Aqil gave check at d3 and went on to lose the game. Instead, he should have found 1... Qh1+ which was winning if he really trained his eyes and looked at the board really closely. He too handed over the baton to his opponent when a win would have ensured him into the Kelantan team instead of that opponent.
As a coach, you would be really upset watching your students lose this way but the experience was priceless if your students could really take something from that.